When you find termites, you want to kill them. However, there is little point in tearing apart the timbers and spraying the scurrying termites with the evilest concoction you can think of, because, back at the nest, the queen is laying about 1000-2000 eggs — a day! The few thousand you kill are soon replaced and the access to the damage you’ve caused is sealed off within minutes while they regroup to re-attack the replacement timber you provide — or they begin attacking undisturbed adjoining timbers.

Application of insecticidal dust, sprays or foam can work, but too often it disturbs termites to the extent they abandon that area. A week or so later when, on inspection, no live termites can be found, the job is declared successful — when it isn’t. A few months later, if new termite action is discovered, you have to get the company back and argue about responsibility and money. And then, this time you might decide to use bait.

In contrast, baiting gets the termites 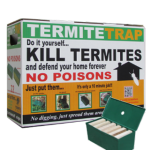 to do their own dirty work. Bait attached to the outside of timbers in which termites are ‘happily eating’ does not threaten or disturb the workers. Once you’ve made a small opening into the wood, the bait, which is more edible than the wood, is placed over the hole and covered with something as simple and as available as aluminium foil sealed down with duct tape. The bait cache then becomes an extension where the good food (moist and easy to harvest) is provided. Take away for termites!

Multiple feeds are always necessary and each time you replenish the bait and see busy termites tunnelling through the bait, you should feel reassured the bait is going back to the nest. When the harvesting rate slows and then stops, you can feel really confident it is because the nest is dead; the colony is no more.

But Doesn’t Baiting Take Months to Kill Compared to Just a Week or so?

Yes, it does take longer and owners are uncomfortable at the wait. However, in consolation, because the bait is a much softer option than chewing off solid wood, the termites concentrate on the bait and less on the wood.

The Australian Standard for termite control calls for the first effort to be directed at the treatment of live termites for a very good reason: live termites will transfer control preparations back to kill off their colony and once the colony is dead, the immediate threat is over and other measures for prevention of new colonies can follow, including monitors.

That’s the crux of the Standard after thousands of hours of expert committee meetings!