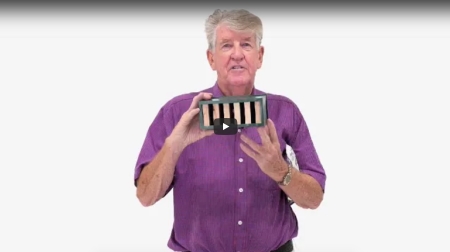 Yet another termite horror story appeared on A Current Affair on Friday 25th October 2013.

He hadn’t known he should have stopped at the first sign of termites. If he had, he would have been able to attach a cache of bait to the architrave and the termites would have emerged from within the timber into the bait to take it back to kill the whole colony.

By the time he called in Rentokil, the termites had vacated all the damaged areas. The Rentokil technician cut out a trapdoor in the flooring to get underneath and took the presenter Howard Gibbs under to show him the damning evidence of repairs to previous termite damage and a termite treatment that not only failed but encouraged greater termite activity. A new floor had been laid over the previous floor which had been badly attacked and some of the stripped out damaged flooring, joists and bearers were lying on the soil and contained thousands of living termites.

After all the usual footage of scurrying termites, wood being crunched effortlessly by hand and the distraught face of the owner, the Rentokil man advised the best treatment was to bait the active termites under the house. That process would at last, kill the colony.

I closing the segment, Tracy Grimshaw summed it up: “it would break your heart.”

There are lessons here for every homeowner.

Don’t buy a home unless it has been inspected thoroughly by a professional. And if they say they can’t get under a suspended floor you want to know why the vendor won’t let them.

If you find live termites eating solid timber in a structure, immediately stop your investigation. If the termites are badly disturbed they vacate that damaged area and will branch off in another direction. if you stop immediately, you can add the non-toxic-to-humans bait to the timber so the termites within can bring about their own destruction. After all they know where their nest is and they take the bait to it.

Not mentioned in that program but good advice nonetheless, All the major and minor pest control service companies that know their stuff, place monitors around the perimeter of buildings to intercept termite scouts foraging for food. This hunt for food is a constant termite activity and so, placing timber in receptacles around a home provides food that is easy to find. Adding bait to the monitors is so reliable it almost never fails unless earthworks like landscaping severs tunnels between the monitors and the nest.

The job is so simple to do and so reliable, DIY Termite Trap systems have been successfully used by homeowners for the last decade. Because there is no travelling time or labour costs, homeowners can do the same job using the same principles (and the same bait) as professionals and save thousands.