In the overview of termite defence, what is the role of termite monitors and, do they increase risk by enticing or encouraging termites up closer to your house?

A long answer has merit because termites can cost you difficult-to-find tens of $thousands. You need to understand the important factors for informed decision making. Here goes: 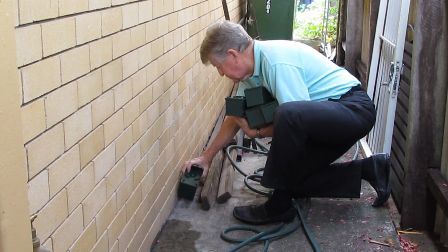 Let’s start with the building codes. The first Australian Standard on termites was written in the early 1950s. Its goal was to ensure that if termites wanted to get to the timbers up in a building, they had to build their tunnels around or over physical barriers (such as ant caps) where they could be seen during the recommended annual (at least) termite inspection. Of course, if no one checked, the termites would keep eating and the repair bill would climb.

So for the last 60+ years, physical barriers have been a mandated part of building practice.

Insecticides with long residual life also became available in the early 1950s and became a requirement in the 1960s when slab floors became the norm for house construction.

The biggest problem with complying with the Australian Standard for insecticidal barriers was that it was to be done in two parts. Part 1 was the application to the soil after all the plumbing/draining was in place and before the membrane went down followed by the steel reinforcing and the concrete pour. Part 1 could be reasonably controlled by the building contractor who coordinated the various trades.

Part 2 has always been a problem. The insecticide had to be soaked into the soil at the rate of 5 litres per lineal metre around the edge of the slab. The Part 2 application didn’t always happen. If it did, it was almost a miracle because, after the slab was sufficiently cured, the carpenters began putting up the framework followed by electricians and plumbers doing their things. Then the bricks were delivered on-site and placed close to the slab so the brickies and their labourers could do their thing. And, as soon as a wall was finished, concreters wanted to lay paths and driveways right up to the slab. So when was the pestie supposed to apply the perimeter barrier? And would it survive the thousands of tradie footmarks and the disturbance from levelling or grading prior to laying the paths and driveways?

As Part 2 is so often a debacle, any pestie, when called in to take on the termite management of a property they were not involved with during construction, always prudently declines to take on the responsibility unless they first do what they can to re-apply the perimeter barrier. This second try is seldom able to provide a 100% continuous belt of poisoned soil even with drilling through paths and tiling. And it is usual for them to quote to install a series of in-ground monitors around the garden areas as well because monitors are another ‘hurdle’ to reduce the termite pressure on the building.

So much for the building codes, what about the termites?

Termites don’t nest inside buildings; the nest is somewhere nearby. A pair from a colonising flight start by eating a piece of wood on or in damp soil and these ‘royals’ look after the first broods until there are enough workers to take over. Once a nest is established and is consuming wood, the survival instincts kick in and they need to find additional food sources.

Think of a time before there were buildings; a pre-historic time when termites were developing their instincts and available wood was either a dead tree, a fallen log or fallen branches. All above the ground. Yes, there were also dead roots in the ground and half-buried logs but termites worked out there has always been more wood above ground level than below.

Survival instincts? Well, if the only food source for a colony was a single branch, log or dead tree and a bushfire turned it to ashes, or a flash flood washed it away, the nest which might be below ground level or inside a living but the hollow tree may survive the fire or flood but suddenly they are without food. The need for multiple food sources is obvious so, over the eons of time, finding additional food sources became an instinctive survival necessity for wood-eating termites.

So how do they find new wood and in particular, the wood up inside your house?

On summer nights when the temperature and humidity are similar to inside the nest, older, experienced workers are sent out of the working galleries to see what they can find. These workers are approaching their use-by date and are expendable if they don’t make it back. Obviously, enough of them do. If they find a way into a house over or through the site of a former chemical barrier which might have been washed away or more likely covered with new soil from landscaping, the successful worker returns to make a ‘report’ and if the find is substantial enough, the “Colony Construction Committee” authorise the commencement of a new ‘highway’ to culinary heaven.

So finally here is the answer to the question of whether monitors including the DIY TermiTraps encourage or entice termites toward your house: NO. They are out snooping around anyway. Wouldn’t you rather have the worker report back to say it found the decoy timber in a Trap instead of your house?

Some stats: at last count, around 150,000 Aussie homes are treated for termite attack each year and, the CSIRO and Archicentre surveys in about 2006 reported a third of all Aussie homes had a history of termite invasion. Here’s another valid observation: every time you see a TV item on a termite horror story, it occurred because termites got inside and no one was regularly checking because the owner thought it wouldn’t happen to them.

There has never been a single piece of timber attacked by termites that wasn’t first discovered by a scouting worker termite which walked up into a building, found it and reported back. Monitors give these scouts something easy for them to find in places they go searching.

Having barriers and monitors can be like belt and braces. It’s not a matter of either/or. You can choose to have both workings in the defence of your home. And especially if the insecticidal barrier is a bit dodgy or it’s getting on toward its 10-year residual life expectancy.

It’s your home, your decision.