You may have found insects in or around the house and you’re unsure whether its a termite or ant.

Termites were often called “white ants” because they were small, there were lots of them together and they were whitish instead of black/brown/reddish.

The easily discernible differences—ants have elbowed antennae, a distinct ‘waist’ between the thorax and abdomen and the flying reproductive ants have a forewing much larger than the hind wing.

Termites shed their equal-sized wing shortly after completing their flight. Reproductive termites and all ants have eyes, but the termite workers and soldiers do not.

Feel free to contact us and know more about termites and whites ants, including the DIY Termite Control System. 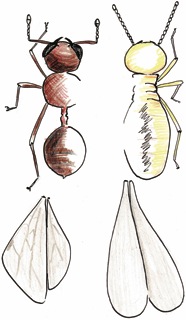