The other 300 plus termites which are insignificant compared to the Coptos, Schedos and Mastos, become significant to homeowners if one of them is found in the garden, the fence and yes, sometimes the house. It is important that you recognise it as a termite even if you don’t know in which of two categories to put it… serious or not so serious.

Instead of describing all of the insignificant termites, it is better to give you some detailed features of the Coptos and Schedos. (See the illustrations below). You already know Mastos as being almost twice the size of the others and found in the North.
Coptos or Coptotermes is the name of the genus and there are a few different species spread around Australia. There is no exam for you to pass so don’t get apprehensive when you read the next couple of sentences. C.acinaciformis is the main destroyer in all states (not Tassie). In WA there is a variant C. acinaciformis raffrayi a different species C.michaelsoni and in the eastern states there are two different species C. lacteus and C.frenchii that are almost in the nuisance category but they do eat houses (slowly). They are also a little smaller than C.acinaciformis, but you’d need to see them all together to notice the size difference. However, the soldiers have the same shaped heads (a bit like an avocado) and they all produce a milky secretion deterrent to ants, from a hole in their ‘foreheads’.

The reason we describe the soldiers is because the head and jaw shapes are more distinctively different than workers that generally are similar for the whole 350+ species. Soldiers are easily recognised from workers when you open up the termite gallery; soldiers have a darker, brown to dark brown head than the pale head of workers. Worker abdomens are larger and more transparent so you can see the dark gut contents.

Schedos or Schedorhinotermes is the genus and five or six species are also spread around Australia. You need fast eyes to see them because they are very timid and quickly hide when you open up the working galleries. Schedo soldiers come in two sizes. The bigger ones are called major (which is an appropriate title for a soldier) the smaller ones are called minor (not so appropriate).

If you only see minors, it is probably because the colony is less than a couple of years old. The majors develop when the colony is more mature. This info is a bit academic because you probably won’t discover Schedos in a building until it is from a reasonably mature colony in which case you will see both sizes — that’s the easiest identification key. The Schedos are the only ones with two ranks of soldiers.

Both Copto and Schedo soldiers have two black jaws sticking out in front when you look at them from above (Schedos also have teeth). They both produce the droplet of milky liquid for defence. The drawings show the shapes better than a written description. 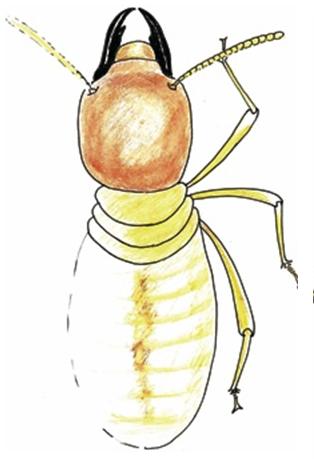 The Giant Northern Termite Mastotermes darwiniensis destroys houses, trees, vehicle tyres (yes, rubber tyres!) and many other materials, faster than any other termite. Identification is pretty easy: they are 13-15mm long (that’s more than half an inch). Most other termites are less than 10mm. They don’t build big mounds; those magnetic (north-south) mounds up that way are grass eaters.

Mastos are easy to entice into monitors. It is a good plan to use timber in the monitor. Cardboard can be consumed in days and they will move on. Inspect monitors every week or two. If you find live Mastos, the IGR (chlorfluazuron) baits are ineffective, you will need to call in a professional who will probably use a fipronil product. If you are apprehensive of chemicals, do not worry unduly. Fipronil is the chemical in Frontline that is put directly onto the skin of dogs to kill and prevent fleas. This means a dilute 3 ml/litre solution of fipronil is even less toxic and you should not be concerned.

There is another genus that deserves special mention because it does attack seasoned timbers as in houses. These are Nasutitermes or Nasutes and they also produce the milky liquid defence response. See the drawing of the head shape of the soldier and you will never have any difficulty in identifying them. The Latin nasus means flask so the flask shaped head gives them their name. These soldiers rely on the milky droplet because they don’t have big mandibles – just tiny mouthparts under the head so they can receive regurgitated nourishment from the workers. N.exitiosus is a mound builder generally found south of a line across the continent passing through the SA/NT border to just above the Qld border.
They are mound-builders and they can severely damage buildings but because it is easy to notice the mound and kill the colony by physically destroying the mound before they do any real damage, they don’t rate in the significant category. However, if you find termite attack and the soldiers have the dark pointy heads, have a really good look around for their mound. It may be in your next door neighbour’s block, it may be over the fence in park or bushland. Go find it and physically destroy it because the chlorfluazuron bait is more expensive and not as quick to kill as a mattock or crowbar. The other Nasutes are not very interested in seasoned timber. For these reasons, I’ve placed the Nasutes in this Nuisance Termites section.

Now we can generalise about the other less significant ones found around our homes and paddocks and sometimes in our monitors — which is another reason they are a nuisance. They are in there taking up space and eating the wood we put there for the Coptos, Schedos or Mastos and the question becomes: what to do about them?

Baiting mound-builders with chlorfluazuron seems a waste of bait. And, most of them are not so affected by it anyway; they often have smaller nests and there is no massive death event to cause the fungus and decomposition gases which kills the bigger colonies. Others are more seasonal in their moulting so you may end up feeding them all through autumn, winter and spring before large scale moulting occurs and this is frustrating. The insecticide fipronil we mentioned earlier for the control of Mastos is probably the best to use but it is restricted to pest technicians.

So, are there other clues to these nuisance termites?

Some have very thin ‘mud’ almost like a plastering appearance up a fence, a post and the ‘mud’ is very dry and fragile. Others make comparatively little amounts of ‘mud’, small tunnels and usually only found in wood that is weathered or even rotting.
Size of the soldiers is not definitive. Coptos and Schedos are about 5-7mm long so if the soldiers you find are smaller than 5mm and the mud is not substantial it is probably a nuisance termite. 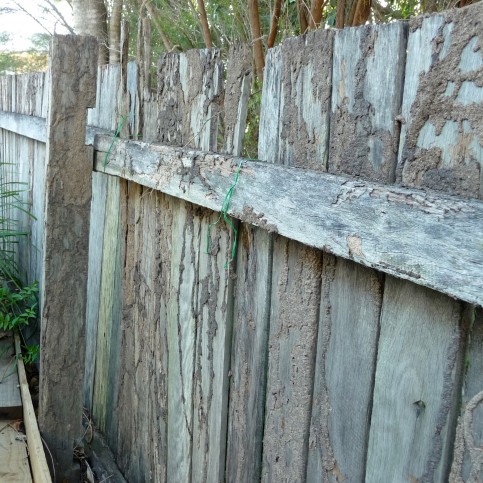 We can possibly assist to identify your termites if you post us soldiers stuck to a piece of clear sticky tape. Your name, address, phone number and a brief description of what they were eating must also be included.

Alternatively you can photograph some soldiers with your phone/camera and email to id@termiteresearch.com.au along with your description of the circumstances. Include your phone number so we can ask other questions that will help us help you. Before you send, check that the image is clear.

NOTE: soldiers are the ones with brown heads; they are sometimes smaller in size than the workers which generally have bigger abdomens.

Back to Top
Previous Chapter Next Chapter