It’s not just the seasons changing

You might have wrapped yourself in a warmed house, a heated car and some woolies during winter but what about the termites?


Cold weather slows them but doesn’t stop them.


This time of the year, as the TV weather-presenters begin talking up warmer spring days, you might start to poke around in your garden and find white ants in mulch, under a couple of bits of timber you’ve been keeping in case they come in handy or some mud packing between the timbers of the retaining wall.

This is what else happens during the first warmer spring evenings…

Older workers that have seen 3-4 springtimes and are approaching their use-by date are considered expendable and are chosen for the most important mission for the good of the colony: scouting for new food sources. Termites are like prudent investors; they don’t like having “all their eggs in one basket.” Eons of evolution has taught them to have multiple food sources because fire or flood could eliminate the one they were depending on.

So, on a warm evening when most predators are gone or won’t see them in the darkness they leave a part of the gallery system and wander off. Their perception of the presence of nearby timber can come from scent of carbon dioxide due to slight decaying or weathering of the surface.

Let me describe what happens from this old worker’s point of view (I’ll call it a she but workers are sexually undeveloped males or females):

~  She leaves through a gap made for her and the others in the side of the mud packing that both holds down the timber offcut beside the path and which keeps out those mongrel ants. Crossing the path by following along the groove she comes to where the expansion joint between the path and the side wall of the house has split away due to years of alternate heat and cold. A bit further on she detects some tannin and resin residues on the path and follows the trail upstream over two courses of bricks until she is standing on the timber screen for the pool pump bolted to the wall.


~  We and the professionals both recommend an inspection of the house once a year —just in case.

~  And then a stronger whiff of timber turns her toward a gap where the electrical cable came out through the wall toward the pump, Inside was a wall stud and all the bits of wood joined together forming the frame. A bite of the stud told her it was good, unpreserved timber and the vibrations of the bite process told her it was big and solid.

~  She ‘set  her GPS’, and headed back retracing her steps to eventually front the ‘construction committee’ at headquarters. She conveyed the quality and quantity of her find, how far and in what direction, then with minimal muttering the committee gave the order for tunnel construction to begin.

~  Most other older workers didn’t make it back, but that’s the way it is.

There was no equivalent of a brass plaque to commemorate our hero (or villain) senior worker who didn’t know anything about, paths, expansion joints, bolts, electrical cables or brick courses and couldn’t see anyway because she doesn’t have eyes.

I made that up about the committee meeting but the equivalent of a GPS is pretty much on the money. We know that bees go back to the hive and dance to convey the direction and distance of the newly found patch of blossoms. Bees and termites are both social insects with the same need to find food — so it’s not entirely fanciful.

So what will termite scouts find around your place this spring? If you’ve placed a lot of TermiTraps around your home, chances are great to good that one of them, containing nice timber in a container that has few holes to seal up to keep out ‘those mongrel ants’ would save them the trouble of looking further. 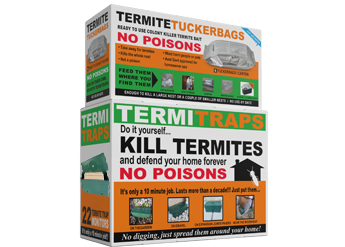